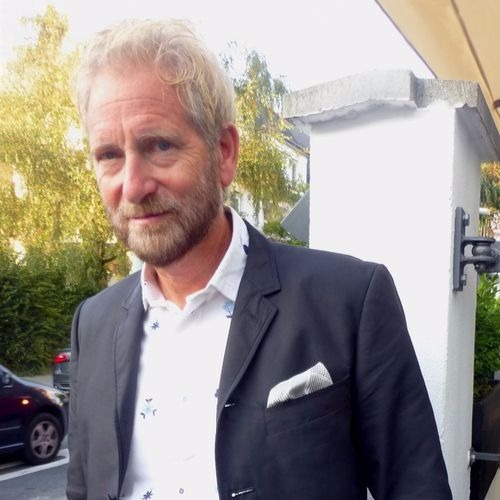 David FeBland was born in London, England and has received professional degrees from The University of Virginia, USA and The University of Manchester, UK. A fully self-taught artist, FeBland pursued careers in Landscape Architecture and Communication Design as well as hosting jazz radio programs before turning his full-time attention to painting in the mid-1980’s. Since 1984, he has bicycled through 55 countries around the world, often using his observations as inspiration for his painting. FeBland’s work considers issues of privacy, conflict and isolation in contemporary urban life, employing a colorist’s eye and a strong sense of formal compositional structure. He describes the interaction between man and his physical universe through a series of invented truths, a sleight of the facts as it were, inspired by observations of everyday life throughout the world. His paintings, drawing upon experiences over a wide range of geographical locations, are driven by a conviction that certain behavioral responses to ones environment are universal. Critics describe his paintings as such: “These images are disarmingly involving. His ability to instill strongly emotive elements into his work also hints at the more graphic work of Ben Shahn and Diego Rivera. It suggests an evolution of socially conscious realism that both Ashcan artists and Shahn flirted with, a very modern response to the Soviet socialist movement that embraces its more expressive elements…. {this is} a quality that gives the movies of Spike Lee their poignancy, and it’s a spirit that FeBland’s works achieve better than his contemporaries.” In FeBland’s words, “I’m not particularly interested making references to Popular Culture in my work because so much of what we commonly associate with that culture is itself distilled through some medium, originally television but now so many other forms of social media, rather than from direct observation. By creating paintings that derive from my own experience, I become the medium rather than a response to it.”