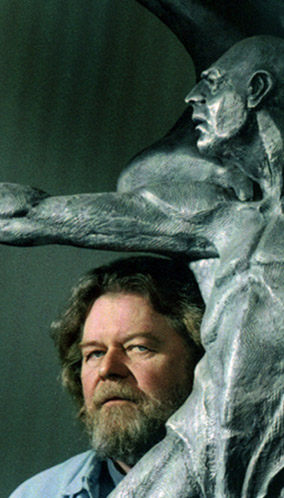 Theodore T. Gall began his career in the arts in the mid-sixties as an animator for teaching films and continued to broaden his skills as a graphic designer. Gall has worked in metal since his early days as an artist. Although his work has not been limited to the human form, it has been his primary focus throughout his career. His compelling figures are most often placed in thought-provoking situations. He studied at the Art Institute of Chicago and the American Academy of Art and has shared his expertise with students at the Clay People in Chicago, The Northshore Art League in Winnetka, Illinois, and the Ojai Art Center in Ojai, California. Gall has exhibited and garnered awards throughout the country and is acquiring a burgeoning international clientele.

“I intend for my sculpture to be intriguing, both visually and psychologically, to draw your imagination into the pieces themselves, allowing you to come to your own conclusions. I hope my artwork stirs your imagination. Have fun!” – T. Gall